Some communities in the world are lucky enough to have blue or green-bin recycling for paper, metal, and organic recylables, but NONE have access to a red bin, or household hazardous waste (HHW) service.

Some municipalities make HHW drop-off depots available, but for limited times during the week and often at long distances away from the communities they allegedly serve.
These realities make it difficult for anyone with HHW to ever properly dispose of it. Wastes often sit in homes, deteriorating or off-gassing, or equally bad, are thrown into the waste stream.

Redbin is a volunteer HHW collection system that you can easily create in your own neighborhood that helps to solve the problem.  All you need is a few minutes once a month, a plastic bin on wheels, and a vehicle or a friend with one when the bin gets full.

Each community can organize themselves around the Redbin ideas modeled on these web pages. It’s easy, fun, helps neighbours get to know one another, and gives everybody a way to do something concrete – at a local level – to reduce the human impact on the planet.

Redbin works best when one person or family undertakes its duties for one or two months at a time.

Once or twice a month, a door-to-door collection of HHWs is undertaken with a rolling plastic bin (painted red!). Neighbours can also bring their HHWs to your location.

Bin duties are shared with those who are interested in your community. Those who are not interested in collecting door-to-door can leave the bin at their home in an easily accessible location, and neighbours can drop their household hazardous waste off. Those who cannot take on bin duties can simply donate their household hazardous waste. In the end, everybody wins!

You can read more ideas of how to create your own community Redbin service, and also download a template for the Redbin logo. You may also wish to use two examples of the Redbin “Poster” and “Handbill” to advertise the service throughout your neighbourhood. Look at Redbin in action to see photos of our first Redbin painting project.

Redbin was born one spring day in 2008 in a crammed but cozy Ontario neighbourhood. David Ridgen and his son noticed that someone had been pouring several litres of used engine oil into the storm sewers outside their house.

Upon some initial research, they read that a very high percentage of pollutants in our environment come from home-based sources – namely improper disposal of household hazardous wastes.

David and his son came up with the idea that they would volunteer to take HHWs to the depot for everyone in their neighbourhood. They painted an old wheeled garbage can red and created a logo for it and for some old black t-shirts. They distributed posters and flyers and every few weekends would trundle their Redbin around the neighbourhood asking for HHWs.

The program was an instant success during its pilot phase, with neighbours bringing their wastes to David and his son’s Redbin. A great way to get to know everyone in the process. 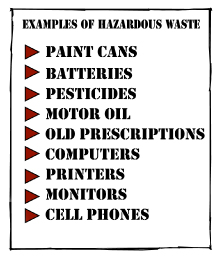 Each community can organize themselves around the Redbin ideas modeled on this page. It’s easy, fun, helps neighbours get to know one another, and gives everybody a way to do something concrete – at a local level – to reduce the human impact on the planet.